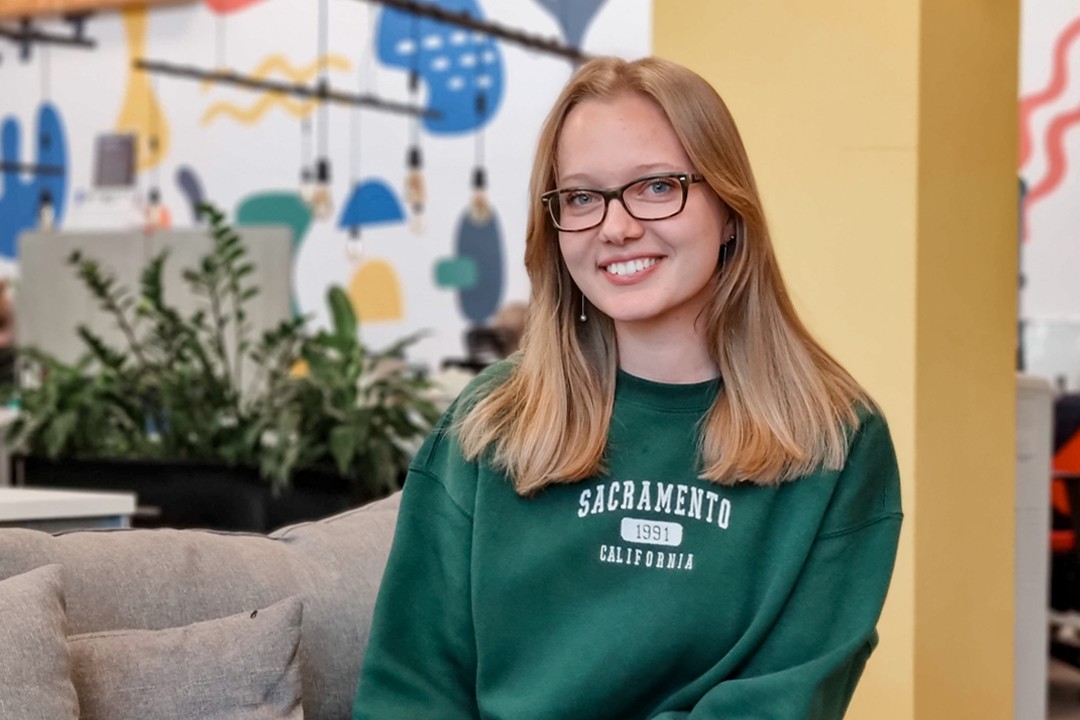 UX/UI designers are in high demand on the job market today. Many equate UX/UI with graphic design, and our colleague Amina explained to us what the differences are, what are the charms and peculiarities of UX/UI and why she chose this type of design. Ivona Narančić, Community manager at tershouse interviewed Amina.

In the mid-1990s, the famous cognitive psychologist and designer Don Norman was the first to use the term 'User Experience' to explain a series of activities his team was engaged in at Apple Computers. Strategy also speaks in support of the importance of UX/UI; according to research, 70% of online customers abandon their purchase due to unsatisfactory UX, and on the other hand, a good UI can increase traffic on online shopping sites by up to 200%.

At the beginning of the conversation with Amina, I immediately asked her to explain to me what UX and UI refer to. "UX/UI design is currently mostly concerned with the creation of websites. UI is most similar to graphic design, while UX is what most separates UX/UI from graphic design, because questions are asked about the user's flow, how to navigate the page, if the user needs to do something on the page, how best to do something. It is researched and constantly updated by observing the user's behavior on the pages, and the UX of the pages should be constantly updated in order to improve the user's experience on the page, and graphic design started with posters, print, but does not ask these questions."

I couldn't help but ask Amina how it all started, and when and how she realized that she really wanted to work in UX/UI. She says that it all started on an exchange in Ireland where she studied digital media and had several subjects related to UX/UI. "I come from the field of graphic design and this is something that interested me. UX is a bit more complex considering that there is a lot of psychology and some additional issues that must be solved in order for the user to navigate the site. After that, I fell in love with UX and started working on it, which was in 2019." Amina also adds that actually the details are the most important and shape the user experience the most. "Just as the little things are the most important in interacting with people, for example a smile on someone's face is big if you meet a person who is frowning behind it, so also small things are the most important in interacting with a website."

As we continued to talk, she pointed out that the most interesting element of UX/UI for her is UX. "Design as design is interesting in every form, interior, graphic design, different types of design have always been more interesting and tempting to me. Every design has its own psychology. In interior design for example the designer thinks about how the user will feel in that room, but UX is the type of psychology that interests me the most. You can do more specific research, test the user's behavior on the page and analyze all that. UX is also a field that is newer and unexplored, so this unexploredness is something that is very attractive to me." According to Amina, it is necessary to be interested in psychology in order to deal with UX/UI design, and it is even more important to be able to put yourself in the position of the user and think from that point of view, and she claims that this is her little superpower.

Towards the end of the conversation, we touched on things that could be significant for people who want to start dealing with UX/UI, and she added that the 'UX breakfast' podcast was very important for her in gaining knowledge, which, according to her, is very good and elaborates topics that are UpToDate. When I asked which social network in her opinion has the best UX/UI, she pointed out TikTok: "A good example, especially as far as the UX side is concerned." TikTok's goal is to retain the user as much as possible, and it succeeds in that, and no one can even compare with them, because they use small videos that retain attention and then use an algorithm to suggest similar videos that interest the user."

She learned a lot from how she deals with this type of design, and she also shared a little advice with our readers and coworkers: "if someone wants to work on UI or practice it, then I recommend taking a page that they really like and completely recreating it in Figma. To start from small details with recreation and there he/she will learn about the anatomy of the site and what is good on that site."